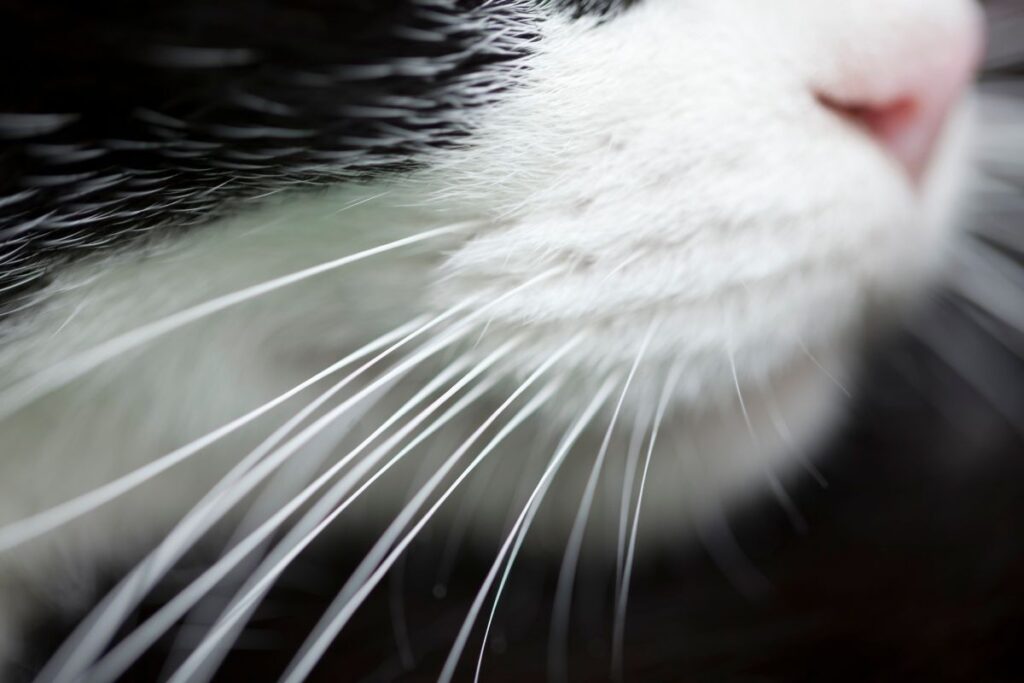 Why Do Cats Have Whiskers?

Cat whiskers are capable of some pretty incredible feats. The following are a few of how cats make use of their whiskers:

The primary purpose of a cat’s whiskers is to enhance the animal’s sense of touch. These sensory cells surround the follicles, which are the structures from which the hairs grow. Tactile information moves through these cells in a manner analogous to the signals reaching the brain from the fingertips.

Cats can feel solid objects they brush against and air currents from movement nearby because their sensory cells get triggered by the tiniest vibrations in their hair.

Some of the whisker follicle cells also contain proprioceptive capabilities. This means that the way gravity pulls on the hair can tell a cat their position concerning the ground below them. This is of the utmost significance for an animal that constantly lands on its feet.

Evidence suggests that a cat’s whiskers may play a role in the animal’s ability to communicate with other cats and attentive humans. Cats may use the little muscles around the base of their whiskers to point them toward potential dangers or relax them when they are happy and content.

If a cat isn’t feeling well, it could make a face by pulling its whiskers into a scowl and rubbing them against its face.

Being Able to Squeeze Into Small Areas

One of the fascinating cat whisker’s purposes is to poke their heads into small spaces, such as boxes or other containers. If you ever spot your cat doing this, you already know what this is.

Because cats cannot use a ruler, they rely on their whiskers to gauge the size of nooks and crannies. This enables them to squeeze into areas that would be difficult for other animals.

The whiskers around a cat’s eyes and above their top lip help trap dust and debris floating in the air, preventing cats from scratching their sensitive eyes. The whiskers on kittens can detect foreign objects, which triggers the cat to blink to protect its eyes from potential danger.

The whiskers of a cat also assist the animal in detecting the presence of jaggy surfaces, such as the edges of furniture and other items.

A cat’s whiskers can detect even the most minute variations in air currents, enabling them to navigate their house even when it is completely dark. Because of their high sensitivity to vibrations, outdoor cats can detect the presence of oncoming automobiles, which gives them an advantage when defending themselves against potential threats.

To Compensate for Vision Impairment

Cats have eyes that are too huge to focus on things closer than a foot away, making it interesting that they are near-sighted rather than close-sighted.

The good news is that their whiskers come in helpful, as they enable them to determine the location of items by touching them or relying on how air currents travel around objects in space. A cat’s whiskers are extremely sensitive that they can even perceive the surface roughness of an object.

A cat’s whiskers are a reliable predictor of the animal’s state of mind. If they press their whiskers flush against their face, it’s a good indication that they’re terrified. When someone is at ease and comfortable in their circumstances, the whiskers on their face will relax and will grow out toward the sides of their face.

Do Cat Whiskers Grow Back?

Even if your cat breaks its whiskers or needs clipping for medical reasons, the hairs that make up these whiskers will regrow as long as the follicles that produce them have no damage in any way. Typical cat whiskers do fall off occasionally, like any other hairs, but never more than one or two at a time.

It could take a cat anywhere from two weeks to three months for its face whisker to grow back to the length it needs to be functional again. It is very natural for some coat colors to have whiskers that come back as black instead of white, and vice versa. The change in hue will not have any effect on how they work.

Can You Trim Cat Whiskers?

Cutting a cat’s whiskers is not unpleasant because the nerves are related to the follicle and not the hair itself; however, you should not do this because it is bad for the cat.

Even indoor kittens rely on the sensory input from their whiskers, and any rapid shift in the information they acquire from their environment can be distressing and cause confusion.

What Happens if You Cut a Cat’s Whiskers?

Whiskers on your cat’s face, unlike the rest of its hair, are deeply in a sensitive area with a load of nerves and blood vessels. This is where you find facial whiskers. Because of their extreme sensitivity, you should avoid cutting them at all costs.

Avoid playing with or touching the animal’s whiskers when caressing or playing with a cat for the same reason. In addition, you should consider giving your cat its food on a plate rather than a bowl because leaning into a bowl may be unpleasant for cats with longer tactile hairs. A plate is a better option for feeding your cat.

That answers the riddle of what the whiskers on your cat represent. You probably weren’t aware of this, but cats also have tactile hairs on the backs of their forelegs. These hairs assist the cat’s nearsighted vision in capturing its prey.

It is difficult to follow all of the beliefs and superstitions that surround cats because there are so many of them, yet, this is one of the most well-known. Do the whiskers on a cat bring good luck?

The link between whiskers and magic has an establishment in scientific research. The connection between cats and magic is no longer as mysterious as it was after scientists uncovered why cats have whiskers and what they are for.

They also knew from their observations that even though cats sometimes lose their whiskers, this was an extremely uncommon occurrence. Anything that is extremely rare also tends to shroud in mystery.

Cats, in addition to protecting humans from the most dangerous creatures of the time, defended humans’ most significant possession, which was food, from rodents such as mice and rats.

How Many Whiskers Do Cats Have?

Even though most cats have 24 whiskers, the number might differ depending on the breed and even the individual cat. However, if you discover that your cat does not have the usual number of whiskers, one of them may have just fallen out, which is a perfectly natural occurrence. This is something that you should not worry about.

Even though whiskers have the appearance of a delicate and mystical organ, they are, in fact, a unique type of hair known as vibrissae, and they are susceptible to shedding in the same way that other hair is. It’s natural for cats to lose their whiskers every so often, so don’t worry if you stumble across one in an unexpected place.

Therefore, if you count your cat’s whiskers and notice that one is missing, it’s likely that the whiskers were going through a transitional phase when you did your counting. In this case, you’ll need to recheck your cat later to see if the whiskers are back.

In some instances, the cat can merely have fewer whiskers overall. Despite this, the distribution is typically still symmetrical overall. For example, if you find that your cat has 20 whiskers and an equal quantity on each cheek, this distribution is likely normal for your feline companion.

Can Cats Injure Their Whiskers?

Even while cat whiskers can send information regarding the environment, the actual hair in the whisker has keratin, just like the hair on your head, and it does not have any emotion.

Despite this, each cat’s whisker follicle associates with anywhere between 100 and 200 neurons, and excessive stimulation of the whisker, sometimes known as “whisker fatigue,” is a real problem.

Whisker tiredness typically occurs through persistent and recurring pressure on the whisker, as well as the firing of neurons in a manner that over-stimulates your cat. It frequently relates to food and water dishes that are inadequate in size.

Bring this up with your cat’s veterinarian if you notice that it doesn’t like eating from its food bowl or acts upset until they empty the food onto the floor. To prevent damage to their delicate whiskers, some dishes with a shallower depth might benefit your cat.

Cat whisker follicles are susceptible to diseases that might damage the haircoat, such as infection, mange, and vasculitis, which can cause the whiskers to fall out or cause their growth to slow down.

In addition, a cat’s whiskers may fall out as a side effect of taking certain medications, such as those used in chemotherapy. If you have any problems with the health of these critical structures, you should always be sure to consult your veterinarian about them.

Why do cats have whiskers? Whiskers are a prominent feature of the cat’s face regardless of whether they are straight, curly, long, or short. It is generally accepted that a cat without whiskers would be an extremely unusual sight; nonetheless, the significance of these structures, which at first glance may seem unimportant to the animal, may surprise you.

Whiskers serve various purposes and are essential to a cat’s ability to communicate with and respond to its surrounding environment.