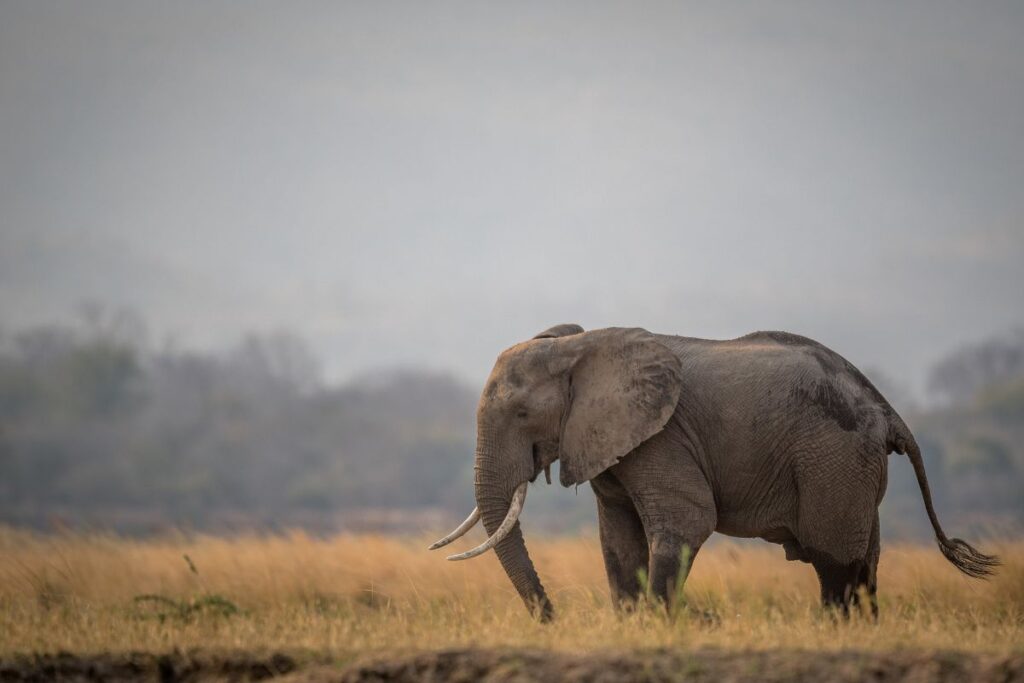 Let’s go over how elephants sleep and why they sleep as they do. We’ll also go over the sleeping habits of baby elephants and list five interesting facts about sleeping elephants.

The Cuteness of Baby Elephants Sleeping

We can all agree that baby elephants sleeping are incredibly adorable, right? In the wild, they will either nuzzle against their mothers to get a few hours of shuteye.

When baby elephants are less than a year old, it is common to see them sleeping or lying on the ground. Usually at their mother’s feet, who keeps a watchful eye over them to ensure they’re okay.

Orphaned baby elephants in captivity commonly sleep next to their caregiver or on a bed of hay. This is to get the feeling of warmth as they would lay next to their mother.

Do Elephants Sleep Standing Up?

Elephants do generally sleep standing up. This is a common trait between all three species of elephant.

It’s common to see an elephant sleeping on its feet or leaning against a tree for balance. They can sleep lying down, but elephants usually don’t for many reasons that we’ll get into in the next section.

There are various reasons why elephants sleep how they do. Here are five interesting facts about sleeping elephants that you may not have known.

Elephants Can Sleep Lying Down

Elephants can sleep lying down but choose not to for different reasons. The main two reasons are because of convenience and safety.

An elephant must spend the majority of its day searching for food. Being the largest land mammals on earth, elephants must always be on the search to find food.

On average, an adult elephant will consume 300lb (136kg) of plants daily to sustain itself. It is more convenient for them to sleep standing up, wake up and look for more food.

Trying to get their big bodies up from the ground is time-consuming. It’s more convenient to get a little sleep standing, then wake up and continue their food search.

The other reason they don’t sleep lying down is predators. Elephants have next to no predators, but that doesn’t mean a tiger or lion won’t try to attack them.

Lying down makes them more vulnerable to these predators, which is another reason they choose to sleep standing. They don’t want to give these predators any opportunity to try and attack.

Elephants are herd animals that have anywhere between 8 to 100 members in their group. Safety in numbers is the key to survival in the wild.

When elephants sleep, they will commonly sleep in a giant huddle. The baby elephants sleep next to their mothers while the others circle around them for extra protection.

While the herd sleeps, there is one elephant that stays awake to keep watch for danger. After a short time, another elephant will take over as a lookout to let that elephant rest.

Once the elephants get their rest, they will continue their never-ending search for food and water.

Researchers have done studies on different herds of animals in the wild. Through this research, wild elephants can, on average, go around 46 hours without sleeping.

The amount of time a herd can go without sleeping depends on its matriarch. They will follow her over vast distances looking for food and water.

Whenever the matriarch decides to stop and rest, the herd stops with her. This trek could last between one or two days, depending on when she wants to rest.

Some matriarchs of elephant herds may go even longer than two days without sleeping. It can be tough being the queen sometimes.

There are two reasons why captive elephants sleep longer than wild elephants.

The whole reason why wild elephants sleep so little is because of the threat of predators and to forage for food. Since they aren’t in danger in a zoo or need to look for food, they have the luxury of sleeping longer.

Elephants Sleep the Least of All Mammals

Not only are elephants the biggest land mammals, but they also sleep the least of all mammals. It may seem strange, but larger animals sleep far less than smaller animals.

To meet the nutrient needs of their large bodies, elephants can, on average, go without sleeping longer than all other mammals. Their constant search for food and the threat of lions or tigers means that sleep is not a priority for them.

Are Elephants Diurnal or Nocturnal?

Elephants are diurnal but do not strictly fall within this category. Most travel during the day and get a few winks of sleep at night.

Although, this isn’t necessarily true for every species of elephant. They each have different sleep schedules that depend on the regions they live in.

African elephants are the most diurnal out of all of the species of elephants. They spend, on average, fourteen hours per day foraging for food.

When it gets dark, African Elephant herds generally stay in one place and rest for a few hours. Usually, staying put from 1 am to 5 am and begin moving again before sunrise.

The sleeping habits of Asian elephants are vastly different than that of their African cousins. They are more on the fringe of being nocturnal animals.

Asian elephants are most active during the early morning hours, before the sun rises, and when it sets. These types of elephants will sleep during the day for around the same amount of time as African elephants.

How Much Do Ellies Sleep?

You would think that an animal as large as an elephant would need hours of sleep. Surprisingly, elephants don’t sleep that much.

In a span of twenty-four hours, elephants in the wild get, on average, two hours of sleep per day. Rarely all at once, but in just bursts.

Elephants can sleep for around five to thirty minutes, wake up, and continue moving. This average amount of sleep goes for both breeds of Asian and African elephants.

Elephants are mammals like us, so that they can go into REM sleep and dream. Although they can dream like humans, many experts believe they don’t dream as frequently as we do.

That’s because elephants predominantly sleep standing up. The common belief about REM sleep is that you must lie down to get there.

Since elephants don’t sleep lying down often, they may not dream as much. However, there hasn’t been much in-depth research on the REM sleeping patterns of elephants.

When experts do more research on this topic, we’ll have a better understanding of the dream cycles of elephants.

Elephants do sleep standing up. Sometimes wild elephants will sleep lying down, but not often due to the danger of predators and the convenience of staying upright. They also sleep the least of any other mammal on the planet. Read our article and find out How Much Sleep Do Dogs Need?