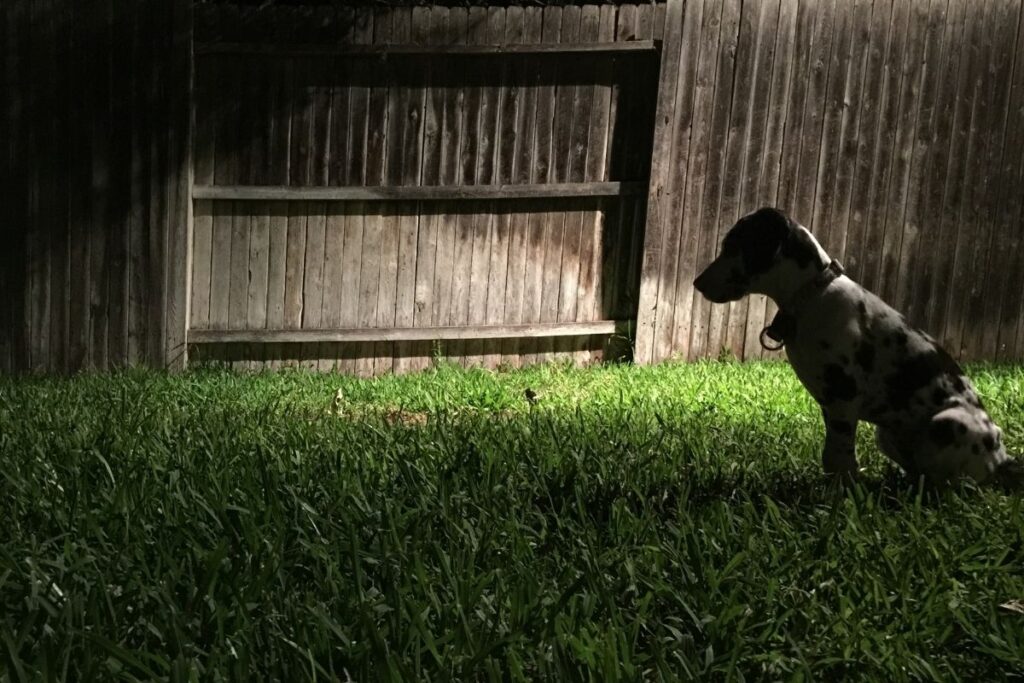 What do Dogs See?

Do dogs have night vision? If you are in the dark about your dog’s eyesight, look no further. Dogs have several differences from humans regarding how their eyes perceive light and motion. These differences allow dogs to adapt to diurnal and nocturnal light conditions, which means they can see well during the day and night.

Do Dogs Have Night Vision?

To shed some light on dog night vision, we need to understand what dogs see in the dark and light.

Dogs evolved from wild canines that were crepuscular, which means that they were primarily active during dusk or dawn. These twilight hours offer an upper hand to a predator as it is a time of low light. The ability to spot movement and discern potential prey is crucial to success when hunting, but the ability to spot danger during broad daylight is critical to survival.

Dogs have become domesticated over the years to fulfill various roles. Some roles include companionship solely. Other functions such as service dogs, working dogs, or sporting dogs need to have good vision during the day and at night to perform their tasks or duties.

A dog’s eye functions in the same manner as a human eye when it comes to allowing light in, focussing on objects, and then relaying a continuous stream of images to the brain. This leads us to assume that dogs see the world as we do, but it is quite clear that at night your dog will have the upper hand when it comes to seeing things before you do.

During the day, a dog has several shortfalls to its vision. For example, dogs only see a few colors, including hues of yellows and blues. They can also only recognize objects from a short distance and have poor depth perception, but they have a definite upper hand when it comes to a dog’s vision at night.

So why do dogs have better night vision than humans? The answer to this question lies within the adaptations a dog’s eye has undergone, allowing it to see in light six times dimmer than a human’s vision.

How do Dogs See at Night?

Combining these adaptations allows dogs to see well during the day, twilight, and night.

Why Do Dogs’ Eyes Glow?

The reason behind a dog’s glowing eyes lies within the tapetum. The color of the tapetum will determine the color reflected by the light. Hues of green, blue, orange, or yellow can be reflected in your dog’s eyes.

Certain dogs with a blue iris sometimes do not have a tapetum, resulting in the light being directly reflected off the blood vessels instead of the tapetum. As a result, these dogs will have a red reflection instead of a greenish-yellow reflection.

Some people may still wonder: “What do dogs see at night if they have a bright light shone into their eyes?”. Dogs are like most other nocturnal animals that become momentarily disoriented by bright lights.

If you come across a dog while driving in your car with your headlights on bright, it is best to turn them down to give the dog time to adjust his eyes and get out of the way.

Dogs will also take longer to adjust their eyes to abrupt changes in light conditions when coming from a bright outdoor area to a dimmer indoor area. This is due to a photopigment called rhodopsin which takes longer to recover its pigment in dogs than in humans.

How Far Can a Dog See?

To understand how far a dog can see, we need to explore how visual acuity is measured. The term 20/20 vision describes what an average individual can see on an eye chart when standing 20 feet (6.1 meters) away.

Dogs have 20/80 vision. This means that a dog must be 20 feet (6.1 meters) away from an object to see it as clearly as a human standing 75 feet (22.9 meters) away. This explains why dogs sometimes do not recognize you from far, but they realize who you are as you come closer.

How is Vision in Dogs Determined?

Several fundamental aspects determine a dog’s vision. The structure of the canine eye is very similar to a human, but there are a few key differences in dog eye anatomy that must be considered when considering their vision. Here are a few interesting differences between humans and dogs:

The study of canine eyesight is not as developed as that of humans, but a few fundamental elements have been explored to help determine a dog’s vision.

Factors that determine dog vision can include:

A dog’s vision can be affected by several breed characteristics. For example, the height of a dog can impact its field of vision. A large breed dog will have a much better visual field than a small breed dog. Brachiocephalic vs. dolichocephalic (short vs. long face) dog breeds have their challenges regarding compromised visual abilities.

When compared to humans, dogs do have good night vision. They have a greater ability to function in dim light. Their retina can respond more rapidly to another image and easily detect motion in low light settings.

Although they may have an inferior color perception, visual acuity, and binocular overlap, dogs are still well-equipped to see during the day, at dusk, dawn, or night.

These visual adaptations have given dogs an upper hand in evolution, which allows them to exploit low light conditions. This will enable dogs to fill gaps in the ecosystem or equip them to fulfill niche occupations.